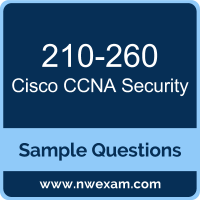 Before you write the Cisco CCNA Security (210-260) certification exam, you may have certain doubts in your mind regarding the pattern of the test, the types of questions asked in it, the difficulty level of the questions and time required to complete the questions. These Cisco Certified Network Associate Security (IINS) sample questions and demo exam help you in removing these doubts and prepare you to take the test.

The best approach to pass your Cisco 210-260 exam is to challenge and improve your knowledge. To test your learning and identify improvement areas with actual exam format, we suggest you practice with Premium Cisco 210-260 Certification Practice Exam. The practice test is one of the most important elements of your Cisco Implementing Cisco Network Security (IINS) exam study strategy to discover your strengths and weaknesses, to improve your time management skills and to get an idea of the score you can expect.

01. What are three key features of URL filtering?
(Choose three)
a) Predefined URL categories
b) Malware protection
c) Custom URL categories
d) Dynamic content analysis
02. What is the most common type of spoofing?
a) Application spoofing
b) Service spoofing
c) DHCP spoofing
d) IP address spoofing
e) MAC address spoofing
03. Which of the following authentication mechanisms can be used with SNMP version 3?
(Choose two)
a) AES
b) MD5
c) 3DES
d) SHA
04. Which of the following is never part of an IKE Phase 2 process?
a) Main mode
b) Specifying a hash (HMAC)
c) Running DH (PFS)
d) Negotiating the transform set to use
05. Which option mitigates VLAN Hopping and Double-tagging VLAN Hopping Attacks?
a) Ensuring that the native VLAN of the trunk ports is different from the native VLAN of the user ports
b) Ensuring that the native VLAN of the trunk ports is the same as the native VLAN of the user ports
c) Setting the trunk port to “off.”
d) Enabling auto trunking negotiations.
06. Which three statements are true about firewalls?
(Choose three)
a) If a system in a security zone is compromised, a firewall can help to contain the attack within that zone.
b) A firewall can prevent undesired access to a network security zone.
c) Modern firewalls provide a complete network security solution.
d) Firewalls typically provide protection between and within network security zones.
e) A firewall can introduce a performance bottleneck.
07. Which two statements are true of the current threatscape?
(Choose two)
a) The technology industry is the only industry that is exempt from attack.
b) The threat landscape is constantly evolving.
c) Due to recent improvements in security technology, password attacks no longer play a significant role in the threatscape.
d) It is so complex that it is impossible to catalog in its entirety.
08. Which type of attack is prevented when you configure Secure Shell (SSH)?
a) DoS session spoofing
b) Man-in-the-middle attack
c) Dictionary attack
d) Buffer overflow
09. Which type of traffic inspection uses pattern matching?
a) Signature–based inspection
b) Statistical anomaly detection
c) Protocol verification
d) Policy-based inspection
10. Which type of VPN technology is likely to be used in a site-to-site VPN?
a) SSL
b) TLS
c) HTTPS
d) IPsec

Note: If you find any error in these Cisco Implementing Cisco Network Security (IINS) sample questions, you can update us by write an email on feedback@nwexam.com.