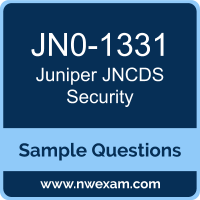 Before you write the Juniper JNCDS Security (JN0-1331) certification exam, you may have certain doubts in your mind regarding the pattern of the test, the types of questions asked in it, the difficulty level of the questions and time required to complete the questions. These Juniper Networks Certified Design Specialist Security (JNCDS-SEC) sample questions and demo exam help you in removing these doubts and prepare you to take the test.

The best approach to pass your Juniper JN0-1331 exam is to challenge and improve your knowledge. To test your learning and identify improvement areas with actual exam format, we suggest you practice with Premium Juniper JN0-1331 Certification Practice Exam. The practice test is one of the most important elements of your Juniper Security Design Specialist (JNCDS-SEC) exam study strategy to discover your strengths and weaknesses, to improve your time management skills and to get an idea of the score you can expect.

01. Which statement regarding BGP flowspec is true?
a) Import policies cannot be used with BGP flowspec NLRIs.
b) Flow updates received from external autonomous systems are automatically accepted.
c) Flow updates are stored in the ~inetflow.0~ routing table.
d) BGP flowspec can only be enabled on ~inet-vpn~ NLRIs.
02. You need to establish a secure connection for remote users so they can access corporate resources from their home computers. In this scenario, which type of VPN should you use?
a) L2VPN
b) full-mesh
c) dynamic
d) static
03. Which Juniper product or function provides dynamic command-and-control protection?
a) screens
b) Unified Threat Management
c) intrusion prevention system
d) Policy Enforcer
04. Due to government regulations, an ISP is responsible for protecting against malware and malicious websites. You are asked to make feature recommendations. In this situation, which feature would you incorporate into your design?
a) application firewall
b) UTM
c) screens
d) GeolP solution
05. You need to hide all of your users behind a single IP address.  Which type of address translation must you use to accomplish this task?
a) static NAT
b) destination NAT
c) static PAT
d) source NAT
06. Which technology enables IPS inspection for users browsing websites that use Transport Layer Security (TLS)?
a) SSL reverse proxy
b) defense in-depth
c) SSL forward proxy
d) screens
07. You want to protect your customer's servers in the DMZ from attacks that could be used to discover the operating system on hosts. Which type of attack are you trying to prevent?
a) signature-based attack
b) reconnaissance attack
c) suspicious packet attack
d) denial-of-service attack
08. Which three types of scripts are available to automate functions in the Junos OS CLI?
(Choose three.)
a) event scripts
b) Java scripts
c) commit scripts
d) op scripts
e) BASH scripts
09. You are asked to implement a VPN connection between third-party and Juniper firewalls. In this scenario, which VPN should you use?
a) policy-based VPN, because routes cannot be shared between third-party and Juniper firewalls
b) a route-based VPN, because it provides greater flexibility and separates security policies from the tunnels
c) a policy-based VPN, because route-based VPNs do not allow for dynamic routing protocols to be used across tunnels
d) a DMVPN, because tunnel establishment occurs automatically across all firewalls
10. Which three statements about chassis clusters are true?
(Choose three.)
a) Branch SRX Series devices can form a cluster with any other branch SRX Series device.
b) Only the same SRX Series models can form a cluster.
c) For SRX1500 clusters, the location and type of NPCs do not need to match in the two devices.
d) Fabric links must be connected using the same type of Ethernet connections.
e) For SRX5800 clusters, the location and type of SPCs must match in the two devices.

Note: If you find any error in these Juniper Security Design Specialist (JNCDS-SEC) sample questions, you can update us by write an email on feedback@nwexam.com.