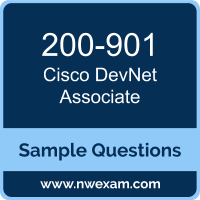 The best approach to pass your Cisco 200-901 exam is to challenge and improve your knowledge. To test your learning and identify improvement areas with actual exam format, we suggest you practice with Premium Cisco 200-901 Certification Practice Exam. The practice test is one of the most important elements of your Developing Applications and Automating Workflows using Cisco Platforms (DEVASC) exam study strategy to discover your strengths and weaknesses, to improve your time management skills and to get an idea of the score you can expect.

01. What are two advantages of the Model-view-controller software design pattern?
(Choose two.)
a) simplifies network automation
b) allows for multiple views of the same model
c) makes code easier to deploy using Cl/CD pipelines
d) reduces need for error handling
e) separates responsibilities of the code, which makes future modifications easier
02. An authentication script fails to connect to an internal server exactly 1 out of 2 times it is executed. This behavior is seen from different clients.
Which networking device must be at fault?
a) load balancer
b) laptop on which the script is running
c) switch
d) router
03. Which Cisco DevNet resource allows access to products in a development lab to explore, learn, and build application that use Cisco APLs?
a) DevNet communities
b) DevNet code Exchange
c) DevNet Automation Exchange
d) DevNet sandbox
04. Before which process is code review performed when version control is used?
a) committing code
b) branching code
c) merge of code
d) checkout of code
05. A company has written a script that creates a log bundle from the Cisco DNA Center every day. The script runs without error and the log bundles are produced.
However, when the script is run during business hours, people report poor voice quality of phone calls. What explains this behavior?
a) The script is written in a low-level programming language where there is no memory safety. This causes a buffer overflow and disruption on the network.
b) The speed and duplex settings in Cisco DNA Center are set incorrectly, which causes the transfer to be too slow.
c) The application is running in the Voice VLAN and causes delays and jitter in the subnet.
d) Generating the logs causes the CPU on the network controller to spike, which causes delays in forwarding the voice IP packets.
06. In DNS, which record specifies an alias that refers to another name that ultimately resolves to an IP address?
a) CNAME
b) NS
c) AAA
d) SOA
07. Package updates from a local server fail to download. However, the same updates work when a much slower external repository is used. Way are local updates failing?
a) The update utility is trying to use a proxy to access the internal resource.
b) The Internet connection is too slow.
c) The Internet is down at the moment, which causes the local server to not be able to respond.
d) The server is running out of disk space.
08. What are two characteristics of Bare Metal environments that are related to application deployment?
(Choose two.)
a) Provides the hypervisor to host virtual servers.
b) Specifically designed for container-based workloads.
c) Provides workloads with access to hardware features.
d) Suitable for legacy application that do not support virtualization.
e) Not compatible with other cloud services such as PaaS or SaaS offerings.
09. On which port does NETCONF operate by default?
a) 23
b) 443
c) 822
d) 830
10. When a Cisco IOS XE networking device is configured using RESTCONF, what is the default data-encoding method?
a) YANG
b) YAML
c) XML
d) x-form-encoding

Note: If you find any error in these Developing Applications and Automating Workflows using Cisco Platforms (DEVASC) sample questions, you can update us by write an email on feedback@nwexam.com.