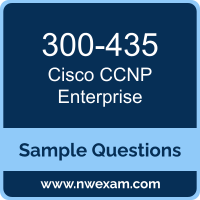 Before you write the Cisco CCNP Enterprise (300-435) certification exam, you may have certain doubts in your mind regarding the pattern of the test, the types of questions asked in it, the difficulty level of the questions and time required to complete the questions. These Cisco Certified DevNet Specialist Enterprise Automation and Programmability (ENAUTO) sample questions and demo exam help you in removing these doubts and prepare you to take the test.

The best approach to pass your Cisco 300-435 exam is to challenge and improve your knowledge. To test your learning and identify improvement areas with actual exam format, we suggest you practice with Premium Cisco 300-435 Certification Practice Exam. The practice test is one of the most important elements of your Automating and Programming Cisco Enterprise Solutions (ENAUTO) exam study strategy to discover your strengths and weaknesses, to improve your time management skills and to get an idea of the score you can expect.

01. A programmer is creating a Meraki webhook Python script to send a message to Webex Teams. Which two elements should be configured to create this script?
(Choose two.)
a) gRPC credentials
b) Webex Teams access token
c) XML formatted request
d) user authentication count
e) webhook server secret
02. With the MV Sense API, which REST endpoint provides LUX level?
a) /merakimv/XXXX-XXXX-XXXX/light
b) /merakimv/XXXX-XXXX-XXXX/raw_detections
c) /merakimv/XXXX-XXXX-XXXX/0
d) /merakimv/XXXX-XXXX-XXXX/zones
03. An engineer needs to create a new network using the Meraki API. Which HTTP action to the URL https:// api.meraki.com/api/v0/organizations//networks will result in a 201 response code?
a) GET
b) POST
c) PUT
d) ADD
04. Setting is used for the dampening period when configuring an on-change publication for YANG-push versus OpenConfig. What are two characteristics of synchronous calls to APIs?
(Choose two.)
a) They block until a response is returned from the servers
b) They make an application less portable, so asynchronous calls are preferred
c) They add perceived latency to an application if data is not received
d) Calls are limited to specific programming languages
e) They do not block while waiting for the API to be processed
05. Webhooks that are generated by Cisco DNA Center are REST calls with which properties?
a) JSON payload delivered via PUT
b) XML payload delivered via POST
c) JSON payload delivered via POST
d) XML payload delivered via PUT
06. When accessing the /device-detail endpoint in Cisco DNA Center, what is an acceptable SearchBy parameter value?
a) platform type
b) IP address
c) software version
d) MAC address
07. What are two benefits of leveraging Ansible for automation of Cisco IOS XE Software?
(Choose two.)
a) Ansible playbooks are packaged and installed on IOS XE devices for automatic execution when an IOS device reboots.
b) All IOS XE operating systems include Ansible playbooks for basic system administration tasks.
c) It is a device-independent method for automation and can be used with any type of device or operating system.
d) Ansible playbooks can be written from the IOS XE EXEC command line to configure the device itself.
e) It does not require any modules of software except SSH to be loaded on the network device.
08. In which direction does the Cisco DNA Center Intent API communicate?
a) westbound
b) eastbound
c) northbound
d) southbound
09. Which two statements are benefits of YANG-push telemetry data over traditional data collection methods?
(Choose two.)
a) The subscription requests use less bandwidth than SNMP polls.
b) It uses UDP rather than TCP.
c) You can precisely define data subscriptions.
d) It scales better than SNMP.
e) It is supported on more devices than SNMP.
10. The Cisco DNA Center Sites API must be used to add a device to a site, but only the site name is available. Which API call must be used to retrieve the site identifier so that the device can be properly added to the network?
a) /dna/intent/api/site/siteId
b) /dna/intent/api/site
c) /dna/intent/api/v1/site
d) /dna/intent/api/v1/site/siteName

Note: If you find any error in these Automating and Programming Cisco Enterprise Solutions (ENAUTO) sample questions, you can update us by write an email on feedback@nwexam.com.