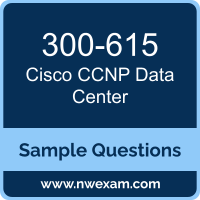 Before you write the Cisco CCNP Data Center (300-615) certification exam, you may have certain doubts in your mind regarding the pattern of the test, the types of questions asked in it, the difficulty level of the questions and time required to complete the questions. These Cisco Certified Network Professional Data Center (DCIT) sample questions and demo exam help you in removing these doubts and prepare you to take the test.

The best approach to pass your Cisco 300-615 exam is to challenge and improve your knowledge. To test your learning and identify improvement areas with actual exam format, we suggest you practice with Premium Cisco 300-615 Certification Practice Exam. The practice test is one of the most important elements of your Troubleshooting Cisco Data Center Infrastructure (DCIT) exam study strategy to discover your strengths and weaknesses, to improve your time management skills and to get an idea of the score you can expect.

01. Cisco Unified Computing System Manager raises a critical error message that indicates that the system has overlapping Ethernet and FCoE VLANs. All of the Ethernet traffic on the overlapping VLANs drops.
Which action resolves the issue?
a) Modify the VLAN assignment to vNICs
b) Change the PIN groups on the vHBAs
c) Modify the FCoE VLAN
d) Set the FCoE VLAN as the native VLAN on server uplinks
02. A Cisco Nexus Series interface is errdisabled with the error message “DCX-No ACK in 100 PDUs”. What is the cause of this error?
a) The host has not responded to the Control Sub-TLV DCBX exchanges of the switch
b) The acknowledgement number in the server response has not incremented for 100 exchanges
c) Cisco Discovery Protocol is disabled on the switch
d) LLDP is disabled on the switch
03. Your client reports that many flaps and server cluster disconnects occur in their data center. While troubleshooting the issue, you discover a network attack hitting their Cisco Nexus 7000 Series Switches and determine that the source IP addresses are spoofed.
Which first-line security solution resolves this issue?
a) Dynamic ARP Inspection
b) Unicast RPF
c) IP Source Guard
d) Storm Control
04. A server fails to boot from the operating system after a RAID1 cluster migration. The RAID remains in an inactive state during and after a service profile association.
Which action resolves the issue?
a) Configure the SAN boot target in the service profile
b) Configure the SAN boot target to any configuration mode
c) Use a predefined local disk configuration policy
d) Remove the local disk configuration policy
05. A request to activate the port security database is rejected. Which action investigates the cause of the issue?
a) Enable the auto-learning feature
b) Use the force option to identify rejected devices
c) Find conflicting entries between the active and configuration databases
d) Verify that devices are fully attached to the active database
06. A server administrator attempts to change the Cisco IMC KVM certificate to one that is signed by a private CA, but the certificate is not accepted.
What causes this process to fail?
a) using a certificate with a password-protected private key
b) using RSA encryption in the generation of the certificate
c) using AES encryption in the generation of the certificate
d) omitting the public IP address of the Cisco IMC in the SAN
07. The external routes fail to propagate to leaf switches in Cisco ACI fabric. Which two actions resolve the issue?
(Choose two.)
a) Enable the VTEP pool in the fabric
b) Assign an MP-BGP AS number to the fabric
c) Specify the spine nodes as route reflectors
d) Associate the correct contract to the L3Out
08. You have an ACI environment with three APICs, two spine switches, and four-leaf switches. You wipe and reboot all APICs first then leaf and spine switches one-by-one and successfully go through the Initial Setuo dialogue on the APIC 1 CIMC KVM console.
When you log in to the APIC1 WebGUI, you notice that you do not see any directly connected leaf switches being discovered under Fabric > Inventory > Fabric Membership.
What is the cause of the issue?
a) The same Fabric Name value should be used before after wiping all devices
b) Rebooting the APICs and the leaf and spine switches after wiping them is not required
c) You forgot to enter the TEP Pool value during the Initial Setup dialogue on APIC1
d) The leaf nodes were not erased properly, which caused a fabric parameters mismatch with the APIC1
09. A network administrator attempts to install an application in the Cisco NX-OS Guest shell and receives an error message that there is not enough space on the disk.
Which command must the administrator run to resolve this issue?
a) guestshell growdisk rootfs [size-in-MB]
b) guestshell pvextend rootfs [size-in-MB]
c) guestshell resize rootfs [size-in-MB]
d) guestshell resize2fs rootfs [size-in-MB]
10. The Cisco Nexus switch is connected to a peer switch that is not running Cisco NX-OS. The switches are connected using port channel and are experiencing packet loss.
Which action should be performed on the Cisco Nexus switch ports to resolve this issue?
a) Turn on lacp suspend-individual
b) Turn on lacp graceful-convergence
c) Turn off lacp graceful-convergence
d) Turn off lacp suspend-individual

Note: If you find any error in these Troubleshooting Cisco Data Center Infrastructure (DCIT) sample questions, you can update us by write an email on feedback@nwexam.com.