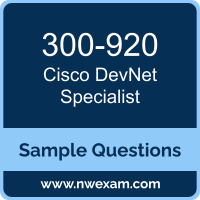 The best approach to pass your Cisco 300-920 exam is to challenge and improve your knowledge. To test your learning and identify improvement areas with actual exam format, we suggest you practice with Premium Cisco 300-920 Certification Practice Exam. The practice test is one of the most important elements of your Developing Applications for Cisco Webex and Webex Devices (DEVWBX) exam study strategy to discover your strengths and weaknesses, to improve your time management skills and to get an idea of the score you can expect.

01. Which expression is a valid Webex Teams webhook filter?
a) personEmail=person@example.com+roomId=abc123
b) personEmail=person@example.com-roomId=abc123
c) personEmail=person@example.com&roomId=abc123
d) personEmail=person@example.com,roomId=abc123
02. A company wants to adopt Webex Teams as a messaging platform and use REST APIs to automate the creation of teams and rooms.
Which sequence of REST API requests is needed to create and populate a new Webex team and create a populated Webex room for the team?
a) POST /teams, POST /memberships, POST /rooms
b) POST /teams, POST /people, POST /rooms
c) POST /teams, POST /team/memberships, POST /rooms
d) POST /teams, POST /team/memberships, POST /rooms, POST /memberships
03. Which two statements about incoming WebEx call notifications on iOS and Android applications are true?
(Choose two.)
a) When running in the background on Android, Firebase Cloud Messaging must use a notification message.
b) When running in the background on Android, Firebase Cloud Messaging must use a data message.
c) Webhooks are required with the iOS SDK only when the application is in the background.
d) When running in the background on iOS, Application Push Notifications must be configured to be silent.
e) Webhooks are required in the foreground and background for iOS and Android applications.
04. What happens if a meeting is in progress when a DelMeeting request is sent in the Webex Meetings XML API?
a) The meeting host is notified and prompted to allow the meeting to be deleted.
b) The DelMeeting request drops all call-in users and deletes the meeting.
c) The DelMeeting request waits until the meeting is completed and then deletes the meeting.
d) The DelMeeting request results in an error.
05. Which two statements describe valid limitations for Webex Teams bot accounts in a group space?
(Choose two.)
a) A bot account cannot send a message without an SSL certificate.
b) A bot account cannot hear a message unless the bot is @ mentioned.
c) A bot account cannot send a message without a valid access token.
d) A bot account cannot respond to another bot.
e) A bot account cannot send a message with an @mention
06. Which xAPI access mechanism requires separate connections for commands and notifications?
a) Serial
b) WebSocket
c) HTTP/HTTPS
d) SSH
07. Which two capabilities are currently supported by the Webex Meetings XML API?
(Choose two.)
a) Request a recording link for playback.
b) Send a text message to the meeting host.
c) Request permissions to schedule on someone else's behalf
d) Schedule a new meeting.
e) Send a problem report.
08. Which Webex Teams webhook resource type indicates that a user interacted with a card?
a) buttonActions
b) attachmentActions
c) webhookCardActions
d) cardActions
09. A Webex Teams bot is deployed but soon it stops responding. Which two explanations are the cause of the issue?
(Choose two.)
a) A new webhook was created, which marks the old webhook as inactive.
b) The web server that is set to receive webhooks is not configured to return a 200 message. And the webhook is disabled.
c) The webhook secret is expired and must be refreshed.
d) The refresh token is not being used.
e) The bot owner regenerated the access token on developer.webex.com.
10. Which user role implicitly has permission in the Events API to retrieve "message created" in the same organization?
a) Compliance Officer
b) User and Device Administrator
c) Full Administrator
d) User Administrator

Note: If you find any error in these Developing Applications for Cisco Webex and Webex Devices (DEVWBX) sample questions, you can update us by write an email on feedback@nwexam.com.