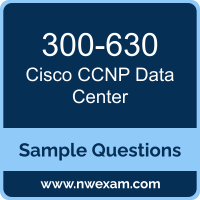 Before you write the Cisco CCNP Data Center (300-630) certification exam, you may have certain doubts in your mind regarding the pattern of the test, the types of questions asked in it, the difficulty level of the questions and time required to complete the questions. These Cisco Certified Specialist ACI Advanced Implementation (DCACIA) sample questions and demo exam help you in removing these doubts and prepare you to take the test.

The best approach to pass your Cisco 300-630 exam is to challenge and improve your knowledge. To test your learning and identify improvement areas with actual exam format, we suggest you practice with Premium Cisco 300-630 Certification Practice Exam. The practice test is one of the most important elements of your Implementing Cisco Application Centric Infrastructure - Advanced (DCACIA) exam study strategy to discover your strengths and weaknesses, to improve your time management skills and to get an idea of the score you can expect.

01. A network engineer configured an active-active firewall cluster that is stretched across separate pods in the Cisco ACI fabric. Which two implementation setups for anycast services are available?
(Choose two.)
a) Deploy a Layer 4 to Layer 7 service graph with PBR
b) Deselect No Default SVI Gateway under EPG Subnet
c) Modify the Cisco ACI contract scope
d) Configure the firewalls behind an EPG subnet
e) Modify the MAC address on the second firewall
02. Which action must be taken to connect two nonsilient servers in active/standby mode to two ACI leaves?
a) Implement a virtual PortChannel on ACI leaves
b) Enable ARP flooding for the bridge domain if the MAC address of the active interface changes after NIC failover
c) Configure ARP flooding for the bridge domain if the MAC address of the active interface stays identical after a NIC failover
d) Disable dataplane learning to avoid endpoint flapping
03. Cisco ACI fabric is migrated from network-centric mode to application-centric mode. What is possible in an application-centric design?
a) Cisco ACI VMM integration with hypervisors
b) remapping of VLAN pools
c) migration of bare metal servers to virtual machines
d) creation of additional EPGs under one bridge domain
04. Where are STP BPDUs flooded in Cisco ACI fabric?
a) in the native VLAN ID
b) in the bridge domain VLAN
c) in the access encapsulation VLAN part of different VLAN pools
d) in the VNID that is assigned to the FD VLAN
05. How does Cisco ACI manage the STP BPDUs between two pods?
a) Cisco ACI spines perform ingress replication for STP BPDUs
b) Cisco ACI spines suppress STP BPDUs to be forwarded to other pods
c) BPDUs are forwarded over IPN using the bridge domain GIPo multicast address
d) Special multicast group 239.255.255.255 is used to forward STP BPDUs
06. What are two characteristics of Cisco ACI and Spanning Tree Protocol interaction?
(Choose two.)
a) When a TCN BPDU is received in a VLAN, Cisco ACI flushes the endpoints for the associated encapsulation.
b) MST BPDUs are flooded correctly in Cisco ACI fabric without additional configuration.
c) STP BPDUs are dropped due to MCP.
d) Cisco ACI must be configured as the STP root for all VLANs.
e) BPDU filter and BPDU guard can be configured on Cisco ACI leaf edge ports.
07. How is multicast traffic managed in a Cisco ACI fabric?
a) FTag trees are rooted at the spine nodes. Cisco APIC determines the roots.
b) FTag trees are rooted at the leaf nodes. Cisco APIC determines the roots.
c) FTag trees are rooted at the leaf nodes. The roots must be configured manually.
d) FTag trees are rooted at the spine nodes. The roots must be configured manually.
08. A cloud provider must make a pair of firewalls available to all tenants. Each tenant defines its own service graph. Where should the Layer 4 to Layer 7 service be configured to accomplish this goal?
a) management tenant
b) infrastructure tenant
c) user tenant
d) common tenant
09. What does the VXLAN source port add to the overlay packet forwarding when it uses the hash of Layer 2, Layer 3, and Layer 4 headers of the inner packet?
a) ECMP
b) TCP optimization
c) disabled fragmentation
d) jumbo frames
10. In a Cisco ACI Multi-Site fabric, the Inter-Site BUM Traffic Allow option is enabled in a specific stretched bridge domain. What is used to forward BUM traffic to all endpoints in the same broadcast domain?
a) ingress replication on the spines in the source site
b) egress replication on the source leaf switches
c) egress replication on the destination leaf switches
d) ingress replication on the spines in the destination site

Note: If you find any error in these Implementing Cisco Application Centric Infrastructure - Advanced (DCACIA) sample questions, you can update us by write an email on feedback@nwexam.com.