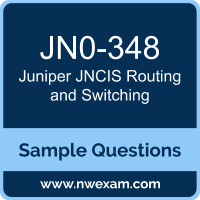 Before you write the Juniper JNCIS Routing and Switching (JN0-348) certification exam, you may have certain doubts in your mind regarding the pattern of the test, the types of questions asked in it, the difficulty level of the questions and time required to complete the questions. These Juniper Networks Certified Specialist Enterprise Routing and Switching (JNCIS-ENT) sample questions and demo exam help you in removing these doubts and prepare you to take the test.

The best approach to pass your Juniper JN0-348 exam is to challenge and improve your knowledge. To test your learning and identify improvement areas with actual exam format, we suggest you practice with Premium Juniper JN0-348 Certification Practice Exam. The practice test is one of the most important elements of your Juniper Enterprise Routing and Switching Specialist (JNCIS-ENT) exam study strategy to discover your strengths and weaknesses, to improve your time management skills and to get an idea of the score you can expect.

01. Which operational mode command will show the VRRP priority?
a) show vrrp detail
b) show interfaces vrrp extensive
c) show vrrp summary
d) monitor interfaces vrrp
02. Which command shows you the status of the redundant trunk groups configured on an EX Series switch?
a) show interfaces
b) show redundant-trunk-group
c) show spanning-tree interface
d) show ethernet-switching redundant-trunk-group
03. Which two tools are useful for monitoring inter-VLAN routing?
(Choose two.)
a) vlan-trace
b) GVRP
c) ping
d) traceroute
04. You must allow both untagged and tagged VLAN traffic to enter an interface on an EX Series switch. Which two methods satisfy this requirement?
(Choose two.)
a) Configure the port with dual-mode VLAN tagging.
b) Configure the port using the voice VLAN feature.
c) Configure the port with the native-vlan-id parameter.
d) Configure the port with the access parameter.
05. Which protocol family must you configure to enable bridging on an interface of an EX Series switch?
a) inet
b) inet-bridging
c) ethernet-switching
d) ethernet-bridging
06. What are three valid bridging mechanisms?
(Choose three.)
a) Forwarding
b) Refreshing
c) Flooding
d) Aging
e) Segmenting
07. A root bridge in an RSTP network is connected to other neighboring bridges using point-to-point links. Which combination of port types can exist on the root bridge?
a) There can be some combination of designated ports and alternate ports.
b) There can be some combination of root ports and alternate ports.
c) All ports will be designated ports.
d) All ports will be root ports.
08. Which two statements regarding an STP BPDU Ethernet frame are true?
(Choose two.)
a) The source MAC address is always 01:80:C2:00:00:00.
b) The destination MAC address is always 01:80:C2:00:00:00.
c) The destination MAC address is the MAC address associated with the receiving interface.
d) The source MAC address is the MAC address associated with the transmitting interface.
09. Which statement is true regarding STP?
a) All switch ports operating in the point-to-point mode have a quicker recovery time than switch ports operating in shared mode.
b) All switch ports must pass through the listening and learning states before they can be placed in the forwarding state.
c) Edge ports are automatically placed in the forwarding state when they are operational.
d) Nonedge ports must receive at least one keepalive every six seconds to remain operational.
10. Which is evaluated first when selecting a BGP route?
a) MED
b) Origin
c) Local preference
d) AS path

Note: If you find any error in these Juniper Enterprise Routing and Switching Specialist (JNCIS-ENT) sample questions, you can update us by write an email on feedback@nwexam.com.