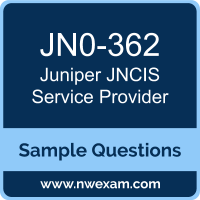 Before you write the Juniper JNCIS Service Provider (JN0-362) certification exam, you may have certain doubts in your mind regarding the pattern of the test, the types of questions asked in it, the difficulty level of the questions and time required to complete the questions. These Juniper Networks Certified Specialist Service Provider Routing and Switching (JNCIS-SP) sample questions and demo exam help you in removing these doubts and prepare you to take the test.

The best approach to pass your Juniper JN0-362 exam is to challenge and improve your knowledge. To test your learning and identify improvement areas with actual exam format, we suggest you practice with Premium Juniper JN0-362 Certification Practice Exam. The practice test is one of the most important elements of your Juniper Service Provider Routing and Switching Specialist (JNCIS-SP) exam study strategy to discover your strengths and weaknesses, to improve your time management skills and to get an idea of the score you can expect.

01. You have configured multiple IP-IP tunnels across your network to provide connectivity to remote sites.
Which technique is used to help the IP endpoints in your network determine the optimal packet size to send across your tunnels?
a) path MTU discovery
b) fragmentation discovery
c) end-to-end MTU discovery
d) packet throughput discovery
02. To prevent fragmentation issues across a GRE tunnel, which MTU value is recommended for the tunnel to accommodate most IP packets?
a) 1476
b)1492
c) 1500
d) 1524
03. Which two statements are true about the LACP protocol?
(Choose two.)
a) It exchanges BPDUs to ensure all member links are functioning properly.
b) It monitors and controls the member links that form a single logical channel.
c) It acts in one of two modes: active and passive.
d) It is used to exchange control information between two MC-LAG network devices.
04. Which three protocols can be encapsulated within a GRE tunnel on a Junos device?
(Choose three.)
a) AppleTalk
b) Aggregated Ethernet
c) IPv6
d) MPLS
e) Ethernet
05. In the evaluation of an RSTP configuration BPDU, which two values are contained in the Bridge ID value?
(Choose two)
a) root bridge address
b) priority
c) originating bridge address
d) port number
06. You have been asked to configure an IPv6 address for a group of interfaces that could belong on different routers. If a packet is sent to that address, it should be received by all routers in the group.
Which address type would be suited for these requirements?
a) Unicast
b) Multicast
c) Anycast
d) Broadcast
07. On a Junos device with dual Routing Engines (REs), which two statements correctly describe the expected behavior if the primary RE fails?
(Choose two.)
a) The backup RE will assume the master role once the Packet Forwarding Engine (PFE) restarts.
b) The backup RE will immediately assume the master role.
c) The new master RE restarts the routing protocol process (rpd) and establishes any required adjacencies based on the configuration.
d) The new master RE maintains the existing protocol adjacencies initially established by the previous master RE.
08. In which two environments would BGP add value?
(Choose two)
a) an enterprise environment with a single upstream connection
b) an enterprise environment with multiple upstream connections
c) a service provider environment
d) a home office environment
09. You must configure your dual-RE Junos device to allow failover to the backup RE without causing protocol or data plane disruption for neighboring devices.
Which two configuration statements are required to accomplish this task?
(Choose two.)
a) set chassis redundancy graceful-switchover
b) set routing-options nonstop-routing
c) set routing-engine redundancy
d) set routing-options graceful-restart
10. You observe that VPN routes are hidden on your PE router. Which situation accounts for these hidden routes?
a) The protocol next-hop is not found in inet.3
b) The protocol next-hop is not found in mpls.0
c) The protocol next-hop is not found in bgp.l3vpn.0.
d) The protocol next-hop is not found in inet.2.

Note: If you find any error in these Juniper Service Provider Routing and Switching Specialist (JNCIS-SP) sample questions, you can update us by write an email on feedback@nwexam.com.