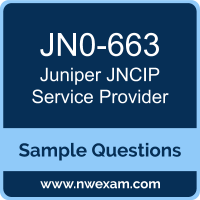 Before you write the Juniper JNCIP Service Provider (JN0-663) certification exam, you may have certain doubts in your mind regarding the pattern of the test, the types of questions asked in it, the difficulty level of the questions and time required to complete the questions. These Juniper Networks Certified Professional Service Provider Routing and Switching (JNCIP-SP) sample questions and demo exam help you in removing these doubts and prepare you to take the test.

The best approach to pass your Juniper JN0-663 exam is to challenge and improve your knowledge. To test your learning and identify improvement areas with actual exam format, we suggest you practice with Premium Juniper JN0-663 Certification Practice Exam. The practice test is one of the most important elements of your Juniper Service Provider Routing and Switching Professional (JNCIP-SP) exam study strategy to discover your strengths and weaknesses, to improve your time management skills and to get an idea of the score you can expect.

Note: If you find any error in these Juniper Service Provider Routing and Switching Professional (JNCIP-SP) sample questions, you can update us by write an email on feedback@nwexam.com.