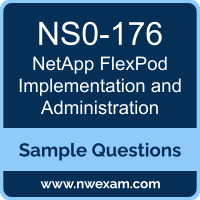 Before you write the NetApp FlexPod Implementation and Administration (NS0-176) certification exam, you may have certain doubts in your mind regarding the pattern of the test, the types of questions asked in it, the difficulty level of the questions and time required to complete the questions. These Cisco and NetApp FlexPod Implementation and Administration (FlexPod) sample questions and demo exam help you in removing these doubts and prepare you to take the test.

The best approach to pass your NetApp NS0-176 exam is to challenge and improve your knowledge. To test your learning and identify improvement areas with actual exam format, we suggest you practice with Premium NetApp NS0-176 Certification Practice Exam. The practice test is one of the most important elements of your Cisco and NetApp FlexPod Implementation and Administration (FlexPod) exam study strategy to discover your strengths and weaknesses, to improve your time management skills and to get an idea of the score you can expect.

01. Which three elements are included in a UCS service profile?
(Choose three.)
a) firmware revisions
b) volume layout
c) switch configuration
d) server definition
e) identity information
02. Your company has acquired a new NetApp EF600 storage array with a 25 Gbps HIC. In this scenario, which FlexPod-supported protocol should be used to connect to this array?
a) NFS
b) iSCSI
c) FC
d) SMB
03. A customer with several large Cisco MDS 9718 switches wants to reduce the number of total zones and the number of commands required to add devices, while still adhering to best practices.
In this scenario, which two configurations should be implemented?
(Choose two.)
a) Use the zone convert command to migrate existing zones.
b) Enable SMART Zoning for new VSANs.
c) Use the zone copy command to migrate existing zones.
d) Disable SMART Zoning for new VSANs.
04. A customer uses Cisco Intersight and now wants to monitor their NetApp storage system with Intersight. In this scenario, which three actions must be completed to accomplish this task?
(Choose three.)
a) Activate the API Gateway in Active IQ Unified Manager.
b) Get an Intersight Essentials tier license.
c) Activate the API Gateway in ONTAP System Manager.
d) Get an Intersight Advantage tier license.
e) Deploy Active IQ Unified Manager.
05. You are installing a FlexPod Express solution with a NetApp AFF A250 at a customer's remote site. In this scenario, which two devices are required to provide an NFS v3 datastore?
(Choose two.)
a) Cisco UCS 6324 Fabric Interconnects
b) Cisco Nexus 3000 Switches
c) NetApp BES-53248 Switches
d) Cisco UCS 6454 Fabric Interconnects
06. Exhibit: 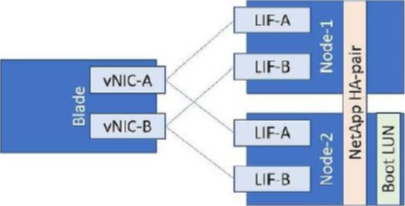 You are configuring iSCSI boot from SAN on your UCS blades. Referring to the exhibit, how many paths will there be to the Boot LUN?
a) 2
b) 4
c) 6
d) 8
07. A customer wants to reuse existing networking equipment that was pulled from another data center for a new FlexPod Datacenter solution. They want to know if their switch models are supported.
In this scenario, which two switch models will accomplish this task?
(Choose two.)
a) Cisco Catalyst 6504
b) Cisco Catalyst 9300-48P
c) Cisco Nexus 9396PX
d) Cisco MDS 9250i
08. Exhibit: 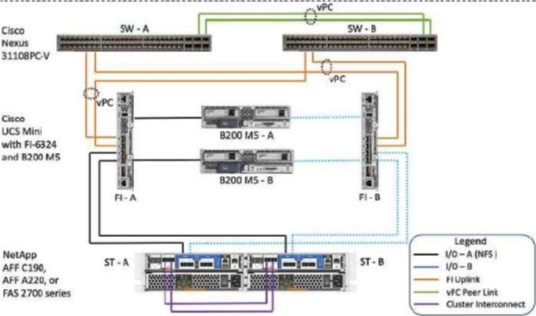 Your customer has a FlexPod VMware solution deployed with NFS datastores. As shown in the exhibit, the links between the Fabric Interconnects and storage controllers are single-mode interface groups with autorevert set to true, hosting a single access LIF. NFS I/O is currently going through fabric A to ST-A. The customer wants to use both fabrics for NFS I/O.
In this scenario, what will accomplish this task?
a) Configure VMware hosts to use a new datastore with an NFS LIF on ST-B connected to fabric B.
b) Migrate the existing LIF that is used for NFS I/O on ST-A to its HA partner ST-B.
c) Add two physical links between SW-A and SW-B.
d) Configure VMware hosts to utilize an NFS LIF on ST-B that is connected to fabric A.
09. Which two NetApp storage solutions are supported in FlexPod solutions?
(Choose two.)
a) ONTAP Select
b) NetApp AFF
c) NetApp E-Series
d) NetApp StorageGRID
10. You currently have a FlexPod Datacenter solution, and you are merging with another company.
That company's environment currently has a mix of different Cisco servers. You want to add as many of those servers to your FlexPod solution as possible.
In this scenario, which two Cisco servers are supported in a FlexPod environment?
(Choose two.)
a) HX240c Edge M5
b) C480 ML M5
c) S3260 M5
d) B200 M5

Note: If you find any error in these Cisco and NetApp FlexPod Implementation and Administration (FlexPod) sample questions, you can update us by write an email on feedback@nwexam.com.