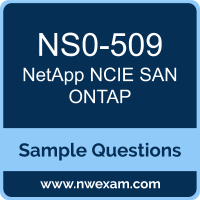 Before you write the NetApp NCIE SAN Specialist ONTAP (NS0-509) certification exam, you may have certain doubts in your mind regarding the pattern of the test, the types of questions asked in it, the difficulty level of the questions and time required to complete the questions. These NetApp Certified Implementation Engineer - SAN Specialist ONTAP (NCIE SAN ONTAP) sample questions and demo exam help you in removing these doubts and prepare you to take the test.

The best approach to pass your NetApp NS0-509 exam is to challenge and improve your knowledge. To test your learning and identify improvement areas with actual exam format, we suggest you practice with Premium NetApp NS0-509 Certification Practice Exam. The practice test is one of the most important elements of your NetApp SAN Specialist ONTAP (NCIE SAN ONTAP) exam study strategy to discover your strengths and weaknesses, to improve your time management skills and to get an idea of the score you can expect.

a) /dev/dm-1
b) /dev/sdc1
c) /dev/sda1
d) /dev/mapper/3600a09804d542d48583f456d506b386c
04. Which resource identifies the number of supported slots for Unified Target Adapter 2 (UTA2) adapters that are available on an AFF A800?
a) Active IQ
b) OneCollect
c) Hardware Universe (HWU)
d) Interoperability Matrix Tool (IMT)
05. You are asked to provision a 500 GB FC LUN to a 4-node ESXi cluster. Each ESXi host is configured with a dual port FC HBA that is cabled into a pair of FC switches which are configured in a standard dual fabric configuration.
After you create the LUN, which objects must be added to the igroup to map the LUN to the ESXi cluster?
a) eight ESXi host WWPNs
b) eight ESXi IQNs
c) eight ESXi host WWNNs
d) eight ESXi host FCIDs
06. Which command provides information on Snapshot copy auto delete variables?
a) -volume modify -space-mgmt-try-first autodelete-
b) -volume snapshot autodelete show-
c) -volume show-
d) -volume file clone autodelete-
07. An administrator creates a storage virtual machine called SVM1 that is provisioned for iSCSI. After the administrator creates a LUN in the storage virtual machine and maps it to an igroup, the end host is unable to mount the LUN.
In this scenario, what is the problem?
a) The initiator is an igroup member of different OS types.
b) The LUN is mapped to multiple igroups.
c) The igroup does not contain the appropriate initiators.
d) The igroup contains multiple initiators.
08. You have a Microsoft Windows Server 2016 SE 64-bit, x64 physical SAN host. Referring to the exhibit, which FAS SAN host component is downloaded from NetApp and installed on the host?

a) Windows Unified Host Utilities
b) Microsoft DSM
c) ONTAP
d) iSCSI Software Initiator
09. Which two commands for data mobility operations would be used to seamlessly move data in ONTAP 9.5?
(Choose two.)
a) -lun move-
b) -vol move-
c) -network interface migrate-
d) -lun map-
10. After applying an upgrade to the VMware cluster, you are asked to solve an issue with the Virtual Storage Console (VSC).
When attempting to create a datastore, volume errors are produced and the creation fails. As part of your troubleshooting tasks, you want to confirm that the currently installed product versions are supported.
Which tool would assist your investigation of this issue?
a) Hardware Universe (HWU)
b) Interoperability Matrix Tool (IMT)
c) SAN Configuration Guide
d) Config Advisor

Note: If you find any error in these NetApp SAN Specialist ONTAP (NCIE SAN ONTAP) sample questions, you can update us by write an email on feedback@nwexam.com.