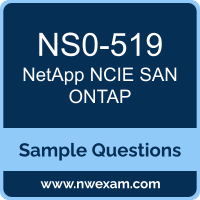 Before you write the NetApp NCIE SAN ONTAP (NS0-519) certification exam, you may have certain doubts in your mind regarding the pattern of the test, the types of questions asked in it, the difficulty level of the questions and time required to complete the questions. These NetApp Certified Implementation Engineer - SAN Specialist ONTAP (NCIE) sample questions and demo exam help you in removing these doubts and prepare you to take the test.

The best approach to pass your NetApp NS0-519 exam is to challenge and improve your knowledge. To test your learning and identify improvement areas with actual exam format, we suggest you practice with Premium NetApp NS0-519 Certification Practice Exam. The practice test is one of the most important elements of your NetApp Implementation Engineer SAN Specialist ONTAP (NCIE) exam study strategy to discover your strengths and weaknesses, to improve your time management skills and to get an idea of the score you can expect.

01. A customer's application is in need of ONTAP 9.7 symmetric active-active paths for iSCSI LUNs.
In this scenario, what should be used to help the customer?
a) a 4-node NetApp AFF All SAN Array
b) a 4-node NetApp AFF
c) a 2-node NetApp AFF All SAN Array
d) a 2-node NetApp AFF
02. You are designing a solution to support an application that requires an FC-attached storage system with symmetric active-active multipathing.
Which NetApp product satisfies this requirement?
a) NetApp HCI
b) NetApp AFF All SAN Array
c) NetApp AFF
d) NetApp SolidFire
03. An administrator is configuring the iSCSI protocol on a newly deployed ONTAP 9.7 cluster. In this scenario, which two actions would accomplish this task?
(Choose two.)
a) Configure SLM.
b) Install a license.
c) Configure an igroup for the host access.
d) Identify the target WWPN.
04. A customer has an existing large aging FC SAN environment that is reaching end of support. The environment consists of several large database servers with attached LUNs. You propose using an AFF A220, but you need to gather all end-to-end information in the current environment.
In this scenario, which resource contains this information?
a) SAN Health Check
b) Interoperability Matrix Tool (IMT)
c) Active IQ OneCollect
d) Hardware Universe (HWU)
05. Referring to the cabling layout shown in the exhibit, what is the minimum number of zones required to maintain qualified multipathing from the host to the ONTAP cluster?
Exhibit: 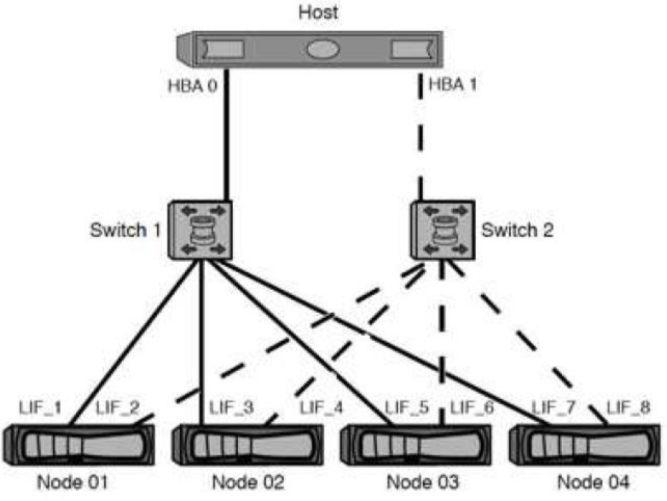 a) 1
b) 2
c) 4
d) 8
06. You are asked to troubleshoot performance issues in a customer's SAN environment. After reviewing the NetApp SAN and hosts for best practices, you have narrowed down the issues to the fabric switches.
In this scenario, which component should be verified?
a) F_port config
b) FLOGI database
c) loss sig counters
d) BB_Credit counters
07. Active IQ OneCollect collects data from which two solutions?
(Choose two.)
a) ONTAP Al
b) Cloud Volumes Service
c) SnapCenter
d) FlexPod
08. An administrator is deploying a MetroCluster configuration with Brocade switches. Following the successful execution of the reference configuration file (RCF), which two actions does the administrator need to perform on the MetroCluster switches?
(Choose two.)
a) Configure zoning.
b) Configure the Inter-Switch Link (ISL) distance attribute.
c) Configure the time zone attribute.
d) Configure the switch port attribute.
09. You have an SVM with FC access and you want to create a LUN. When creating the LUN, which statement is true?
a) The volume containing the LUN should be a FlexGroup volume.
b) You should map the LUN to multiple portsets.
c) The volume containing the LUN should be a FlexVol volume.
d) The volume containing the LUN should be a traditional volume.
10. Which statement is correct about the AFF All SAN Array (ASA)?
(Choose two.)
a) AFF ASA supports multiple protocols including NFS, FC, and NVMe over Fibre Channel.
b) AFF ASA supports near-instantaneous unplanned failovers and givebacks.
c) AFF ASA provides active-optimized and active-non-optimized to any LUN hosted on either controller in the HA pair.
d) AFF ASA provides an active path to any LUN that is hosted on either controller in the HA pair.

Note: If you find any error in these NetApp Implementation Engineer SAN Specialist ONTAP (NCIE) sample questions, you can update us by write an email on feedback@nwexam.com.