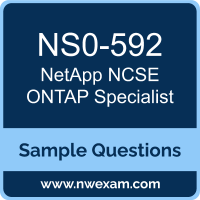 The best approach to pass your NetApp NS0-592 exam is to challenge and improve your knowledge. To test your learning and identify improvement areas with actual exam format, we suggest you practice with Premium NetApp NS0-592 Certification Practice Exam. The practice test is one of the most important elements of your NetApp Support Engineer ONTAP Specialist (NCSE ONTAP) exam study strategy to discover your strengths and weaknesses, to improve your time management skills and to get an idea of the score you can expect.

01. A new cluster running ONTAP 9.5 has just been installed and you want to create a FlexGroup volume. Which action will accomplish this task?
a) Use the volume create command.
b) Use the volume size command.
c) Use the Deploy utility to provision the FlexGroup volume.
d) Use the storage pool create command.
02. You are running a fabric-attached MetroCluster configuration with ONTAP 9.3 software. There is a maintenance window for the upcoming weekend. Plexes in your mirrored aggregates between your two data centers have not been synchronizing for two days.
When the resynchronizations begin, they are not as quick as expected, and the process takes more than a day.
You have been modifying the number of concurrent I/O streams using the storage raid-options modify raid. resync.num_concurrent_ios_per_rg command, but the resynchronization speed stays slow.
You have four separate ISLs between your data centers using Brocade 6510 switches. Hardware problems are not an issue.
Which two actions should you take to prevent this problem in the future?
(Choose two.)
a) Update to at least ONTAP 9.4 software.
b) Restart the resynchronizations after modifying storage raid-options modify raid.resync.num_concurrent_ios_per_rg command.
c) Avoid changes on your aggregates during the maintenance window.
d) Take the corresponding plexes offline before maintenance to avoid a base-level synchronization.
03. An administrator wants to keep an automatic daily up-to-date copy of a volume at a disaster recovery location. What should the administrator do to achieve this goal?
a) Perform a volume relocation to the remote location.
b) Configure a SnapMirror relationship to the remote location.
c) Configure a SyncMirror relationship to the remote location.
d) Perform an NDMP dump to the remote location.
04. You need to verify the currently active reference configuration file (RCF) version on a CN1610 cluster network switch. Which command will show you this information?
a) script list
b) show version
c) show running-config
d) show bootvar
05. Which two statements are true about a data volume?
(Choose two.)
a) A data volume can be accessed by a LIF on any node.
b) A data volume can be moved to any aggregate with space for it in the cluster.
c) A data volume can be accessed by a user connected to any SVM.
d) An SVM root or root load sharing mirror volume must be present on every node.
06. A customer reports that a node is unhealthy. The cluster show command indicates that the node's eligibility is false.
The cluster ring show command shows all the affected node's units as offline. After a reboot of the node, all of the errors still exist. The cluster is otherwise healthy.
What would you recommend to the customer to solve the issue with the node?
a) Restart the secd process.
b) Resync the node's configuration from the cluster.
c) Execute the sudo spmctl -e -h mgwd command.
d) Stop the spmctl process.
07. Your current FAS2554 has 24 internal drives and a DS4243 external drive shelf. After you connect a new DS212C shelf to the SAS stack, the new DS212C shelf is not being recognized.
In this scenario, what is a supported method to enable the DS212C to work with the FAS2554?
a) Before you attach the DS212C shelf, replace the IOM12 modules in the DS212C with IOM6 modules.
b) Shut down the FAS2554 and replace the IOM3 modules in the DS4243 shelf with IOM12 modules.
c) Nondisruptively connect the ACP cabling to the new DS212C shelf.
d) Create a SAS stack on the FAS2554 for the DS212C shelf.
08. A customer reports that Vscan traffic is higher than CIFS traffic. The configuration separates the Vscan and CIFS traffic by using interface groups, each of which uses a LIF in its own subnet.
Which statement describes what is happening?
a) The Vscan server is requesting a larger average block size than the CIFS clients.
b) The Vscan server is not behaving as expected, and investigation with the vendor is required.
c) This behavior is expected and depends upon Vscan server configuration.
d) This behavior is abnormal and requires a perfstat along with a network trace for further analysis.
09. You want to add aggregate-level read caching to your storage. Which NetApp technology would you implement to accomplish this goal?
a) Flash Cache
b) FlexGroup
c) FlexCache
d) Flash Pool
10. You have a 2-node ONTAP Select HA deployment. In this scenario, which application manages the quorum, if one node fails?
a) ONTAP Mediator
b) ONTAP Deploy VM
c) vCenter Server
d) Tiebreaker

Note: If you find any error in these NetApp Support Engineer ONTAP Specialist (NCSE ONTAP) sample questions, you can update us by write an email on feedback@nwexam.com.