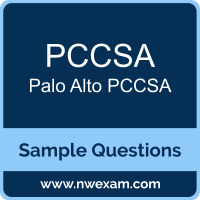 Before you write the Palo Alto PCCSA certification exam, you may have certain doubts in your mind regarding the pattern of the test, the types of questions asked in it, the difficulty level of the questions and time required to complete the questions. These Palo Alto Networks Certified Cybersecurity Associate (PCCSA) sample questions and demo exam help you in removing these doubts and prepare you to take the test.

The best approach to pass your Palo Alto PCCSA exam is to challenge and improve your knowledge. To test your learning and identify improvement areas with actual exam format, we suggest you practice with Premium Palo Alto PCCSA Certification Practice Exam. The practice test is one of the most important elements of your Palo Alto Cybersecurity Associate (PCCSA) exam study strategy to discover your strengths and weaknesses, to improve your time management skills and to get an idea of the score you can expect.

01. Which option is an example of a logical address?
a) IP address
b) hardware address
c) MAC address
d) burned-in address
02. What does the first phase of implementing security in virtualized data centers consist of?
a) consolidating servers across trust levels
b) consolidating servers within trust levels
c) selectively virtualizing network security functions
d) implementing a dynamic computing fabric
03. Which two protocols function at the Transport layer of the OSI model?
(Choose two).
a) Transmission Control Protocol (TCP)
b) Internet Protocol (IP)
c) User Datagram Protocol (UDP)
d) Hypertext Transfer Protocol (HTTP)
04. In which cloud computing service model does a provider’s applications run on a cloud infrastructure and the consumer does not manage or control the underlying infrastructure?
a) platform as a service (PaaS)
b) infrastructure as a service (IaaS)
c) software as a service (SaaS)
d) public cloud
05. Which VPN technology is currently considered the preferred method for securely connecting a remote endpoint device back to an enterprise network?
a) point-to-point tunneling protocol (PPTP)
b) secure socket tunneling protocol (SSTP)
c) Internet Protocol Security (IPsec)
d) Secure Sockets Layer (SSL)
06. Which technique is not used to break the command-andcontrol (C&C) phase of the Cyber-Attack Lifecycle?
a) blocking outbound traffic to known malicious sites and IP addresses
b) vulnerability and patch management
c) DNS sinkholing and DNS poisoning
d) all of the above
07. The OSI model consists of how many layers?
a) seven
b) nine
c) four
d) six
08. What are three characteristics of application firewalls?
(Choose three.)
a) proxies traffic rather than permitting direct communication between hosts
b) can be used to implement strong user authentication
c) masks the internal network from untrusted networks
d) is extremely fast and has no impact on network performance
09. A Zero Trust network security model is based on which security principle?
a) due diligence
b) least privilege
c) non-repudiation
d) negative control
10. Which option is an important characteristic or capability of advanced malware?
a) distributed, fault-tolerant architecture
b) multi-functionality
c) hiding techniques such as polymorphism, metamorphism, and obfuscation
d) all of the above

Note: If you find any error in these Palo Alto Cybersecurity Associate (PCCSA) sample questions, you can update us by write an email on feedback@nwexam.com.