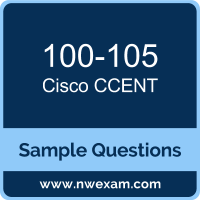 Before you write the Cisco CCENT (100-105) certification exam, you may have certain doubts in your mind regarding the pattern of the test, the types of questions asked in it, the difficulty level of the questions and time required to complete the questions. These Cisco Certified Entry Networking Technician (ICND1) sample questions and demo exam help you in removing these doubts and prepare you to take the test.

The best approach to pass your Cisco 100-105 exam is to challenge and improve your knowledge. To test your learning and identify improvement areas with actual exam format, we suggest you practice with Premium Cisco 100-105 Certification Practice Exam. The practice test is one of the most important elements of your Cisco Interconnecting Cisco Networking Devices Part 1 (ICND1) exam study strategy to discover your strengths and weaknesses, to improve your time management skills and to get an idea of the score you can expect.

01. Which command can you enter to allow Telnet to be supported in addition to SSH?
a) transport input telnet
b) transport input telnet ssh
c) no transport input telnet
d) privilege level 15
02. Which is the most secure method of remotely accessing a network device?
a) HTTP
b) SSH
c) Telnet
d) RMON
03. Which Cisco IOS command will indicate that interface GigabitEthernet 0/0 is configured via DHCP?
a) show interface GigabitEthernet 0/0
b) show ip interface GigabitEthernet 0/0 dhcp
c) show ip interface dhcp
d) show ip interface GigabitEthernet 0/0
e) show ip interface GigabitEthernet 0/0 brief
04. Which statement about the nature of NAT overload is true?
a) applies a one-to-one relationship to internal IP addresses
b) applies a one-to-many relationship to internal IP addresses
c) applies a many-to-many relationship to internal IP addresses
d) can be configured only on Gigabit interfaces
05. Which command is used to configure an IPv6 static default route?
a) ipv6 route ::/0 interface next-hop
b) ipv6 route default interface next-hop
c) ipv6 route 0.0.0.0/0 interface next-hop
d) ip route 0.0.0.0/0 interface next-hop
06. Which command correctly assigns a subinterface to VLAN 50 using 802.1Q trunking?
a) Router(conﬁg)#encapsulation 50 dot1Q
b) Router(conﬁg)#encapsulation 802.1Q 50
c) Router(conﬁg-if)#encapsulation dot1Q 50
d) Router(conﬁg-if)#encapsulation 50 802.1Q
07. Which three statements about MAC addresses are correct?
(Choose three.)
a) The MAC address is also referred to as the IP address.
b) To communicate with other devices on a network, a network device must have a unique MAC address.
c) The MAC address of a device must be configured in the Cisco IOS CLI by a user with administrative privileges.
d) A MAC address contains two main components, the first of which identifies the manufacturer of the hardware and the second of which uniquely identifies the hardware.
e) An example of a MAC address is 0A:26:B8:D6:65:90.
f) A MAC address contains two main components, the first of which identifies the network on which the host resides and the second of which uniquely identifies the host on the network.
08. Which information does the show vlan command display?
a) VTP domain parameters
b) VMPS server conﬁguration parameters
c) ports that are conﬁgured as trunks
d) names of the VLANs and the ports that are assigned to the VLANs
09. Which three statements about network characteristics are true?
(Choose three.)
a) Speed is a measure of the data rate in bits per second of a given link in the network.
b) Scalability indicates how many nodes are currently on the network.
c) The logical topology is the arrangement of cables, network devices, and end systems.
d) Availability is a measure of the probability that the network will be available for use when it is required.
e) Reliability indicates the dependability of the components that make up the network.
10. Which two statements about the purpose of the OSI model are accurate?
(Choose two.)
a) deﬁnes the network functions that occur at each layer
b) facilitates an understanding of how information travels throughout a network
c) ensures reliable data delivery through its layered approach
d) changes in one layer do not impact other layers

Note: If you find any error in these Cisco Interconnecting Cisco Networking Devices Part 1 (ICND1) sample questions, you can update us by write an email on feedback@nwexam.com.