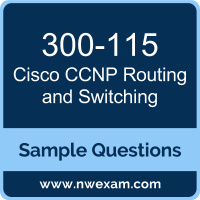 The best approach to pass your Cisco 300-115 exam is to challenge and improve your knowledge. To test your learning and identify improvement areas with actual exam format, we suggest you practice with Premium Cisco 300-115 Certification Practice Exam. The practice test is one of the most important elements of your Cisco Implementing Cisco IP Switched Networks (SWITCH) exam study strategy to discover your strengths and weaknesses, to improve your time management skills and to get an idea of the score you can expect.

01. Which two statements about SDM templates are true?
(Choose two.)
a) They are available on all Cisco devices.
b) They are used to allocate system resources.
c) Changing the SDM template will not disturb switch operation.
d) You can verify the SDM template that is in use with the show sdm prefer command.
02. Which two statements apply to LLDP?
(Choose two.)
a) It is a proprietary Cisco product.
b) It runs on the data link layer.
c) It is not enabled by default on Cisco devices.
d) To verify neighbors, you would use the show cdp neighbors command.
03. Which two statements apply to topology-based switching?
(Choose two.)
a) It is functionally equivalent to Cisco Express Forwarding.
b) It is the preferred switching mode in Cisco multilayer switches.
c) It is also known as route caching.
d) It is slower than fast switching.
04. Which two of these messages are sent out by the DHCPv6 server?
(Choose two.)
a) SOLICIT message
b) ADVERTISE message
c) REQUEST message
d) CONFIRM message
e) RENEW message
05. What is the aim of the sticky option when it is used with port security?
a) A learned MAC address must stick to one single port.
b) A dynamically learned MAC address is considered to be like a statically learned MAC address.
c) For a given MAC address with the sticky option, the port security feature applies to whichever port the MAC address connects to.
d) A router on a stick can bypass the port security feature and use one MAC address per subinterface.
06. The storm control feature controls which type of traffic?
a) unicast
b) broadcast
c) multicast
d) all of the above
07. Which command enables HSRP on a Cisco IOS device?
a) standby virtual ip 10.1.1.1
b) standby ip 10.1.1.1 group 1
c) hsrp 1 ip 10.1.1.1
d) standby 1 ip 10.1.1.1
08. Which HSRP group uses the MAC address 0000.0c07.ac01?
a) group 0
b) group 7
c) group 11
d) group 1
09. If you have four routers enabled for the same HSRP group, how many of them will be in the standby state?
a) 0
b) 1
c) 2
d) all, except the active router
10. A hierarchical network’s distribution layer aggregates which of the following?
a) Core switches
b) Broadcast domains
c) Routing updates
d) Access layer switches

Note: If you find any error in these Cisco Implementing Cisco IP Switched Networks (SWITCH) sample questions, you can update us by write an email on feedback@nwexam.com.