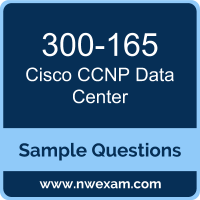 Before you write the Cisco CCNP Data Center (300-165) certification exam, you may have certain doubts in your mind regarding the pattern of the test, the types of questions asked in it, the difficulty level of the questions and time required to complete the questions. These Cisco Certified Network Professional Data Center (DCII) sample questions and demo exam help you in removing these doubts and prepare you to take the test.

The best approach to pass your Cisco 300-165 exam is to challenge and improve your knowledge. To test your learning and identify improvement areas with actual exam format, we suggest you practice with Premium Cisco 300-165 Certification Practice Exam. The practice test is one of the most important elements of your Cisco Implementing Cisco Data Center Infrastructure (DCII) exam study strategy to discover your strengths and weaknesses, to improve your time management skills and to get an idea of the score you can expect.

01. Which two statements about FCoE are true?
(Choose two.)
a) FCoE is, from the perspective of Fibre Channel, just another upper-layer protocol.
b) FCoE is, from the perspective of Ethernet, just another type of cable.
c) FCoE EtherType is 0x8906.
d) FCoE ensures lossless delivery of SAN traffic.
e) FCoE accommodates FC traffic on Ethernet by following Cisco proprietary protocols.
02. What are two default user roles on the Cisco Nexus 5600 switch?
(Choose two.)
a) network-admin
b) AAA-operator
c) network-operator
d) AAA-admin
e) admin-operator
03. Which statement is true about HSRP versions?
a) HSRP version 2 is backwards compatible with version 1.
b) Both HSRP versions 1 and 2 support IPv6.
c) HSRP version 2 allows more HSRP groups than version 1.
d) HSRP version 2 is also known as VRRP.
04. Which statements are correct about MST?
(Select two.)
a) MST uses PVRST+ for each STP instance.
b) Two switches are in the same MST region if their region names match
c) MST is supported on Cisco Nexus switches.
d) Only MSTI0 sends BPDUs.
e) MST Instance 1 is also called the IST.
05. Which statement about SSH on Cisco NX-OS is true?
a) SSH is enabled by default.
b) SSH can work only on IPv4.
c) On Cisco Nexus 7000, one SSH configuration applies to all VDCs.
d) SSH requires a special license.
06. Which statement is true about HSRP configuration?
a) You need to enable the HSRP feature before you start the HSRP configuration.
b) The default HSRP priority is 200.
c) The virtual IP address can be the same as the IP address on one of the interfaces.
d) The device with the lowest HSRP priority becomes the HSRP active router.
07. Select statement that is correct about STP Edge port.
a) compliments Cisco PortFast feature
b) STP edge port transitions from initialization straight to the listening state
c) should be configured on ports to which workstations and servers connect to
d) layer 3 feature
08. Take a look at the figure. Which two types can the pointed out port be?
(Choose two.)
a) E
b) TE
c) F
d) TF
e) N
09. Which two statements about Precision Time Protocol (PTP) are true?
(Choose two.)
a) PTP accounts for the roundtrip time of PTP packets.
b) Version 2 of the protocol uses stratums to describe the quality of the time source.
c) PTP works over TCP.
d) PTP is equivalent to NTP version 5.
e) PTP offers more accurate timekeeping than NTP.
10. Which statement about Cisco Fabric Services is true?
a) Cisco Fabric Services is a standard protocol.
b) Discovery of CFS-capable devices is a manual job.
c) Cisco Fabric Services is the updated version of NSF.
d) Non-CFS-capable switches may prevent a part of the fabric from receiving the intended distribution.

Note: If you find any error in these Cisco Implementing Cisco Data Center Infrastructure (DCII) sample questions, you can update us by write an email on feedback@nwexam.com.