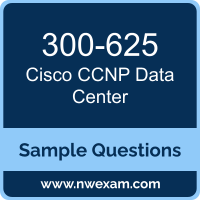 Before you write the Cisco CCNP Data Center (300-625) certification exam, you may have certain doubts in your mind regarding the pattern of the test, the types of questions asked in it, the difficulty level of the questions and time required to complete the questions. These Cisco Certified Specialist Data Center SAN Implementation (DCSAN) sample questions and demo exam help you in removing these doubts and prepare you to take the test.

The best approach to pass your Cisco 300-625 exam is to challenge and improve your knowledge. To test your learning and identify improvement areas with actual exam format, we suggest you practice with Premium Cisco 300-625 Certification Practice Exam. The practice test is one of the most important elements of your Implementing Cisco Storage Area Networking (DCSAN) exam study strategy to discover your strengths and weaknesses, to improve your time management skills and to get an idea of the score you can expect.

01. Which two tools are included in Cisco Prime DCNM for SAN?
(Choose two.)
a) Cisco Security Manager
b) Cisco Traffic Analyzer
c) Device Discovery
d) Cisco DCNM-LAN server
e) Cisco DCNM-SAN Client
02. A Cisco MDS Series Switch with the POAP feature boots and does not find the startup configuration. Which location is checked first when the switch enters POAP mode?
a) USB device that contains the software image files and the switch configuration file
b) DHCP server to bootstrap the interface IP address, gateway, DNS server, and TFTP IP addresses
c) TFTP server where the necessary configuration files are downloaded
d) HTTP server where the URL is used to download the software image
03. What is the effect of a non-graceful virtual machine shutdown on a virtualized server that is connected to a SAN with Fibre Channel interfaces?
a) NP Port reload connected to the upstream SAN switch
b) out-of-service Fibre Channel interfaces on the SAN switch
c) frames stuck in the storage system
d) frames stuck in the HBA buffer of the server
04. A network engineer is configuring a Cisco MDS switch for FCoE. Which two conditions must be considered during the implementation phase?
(Choose two.)
a) On Cisco MDS switches, system-defined class maps for class-FCoE and classdefault are enabled but can be deleted.
b) The QoS policy must be identical to other Cisco FCoE switches in the network.
c) On the Cisco MDS, the MTU is set equal to 2112.
d) VLAN 1 or the native VLAN can be mapped to an FCoE VSAN.
e) FCoE is already enabled on a Cisco MDS switch.
05. What does an unlicensed DCNM SAN fail to display?
a) Fibre Channel, FCoE, and iSCSI topologies
b) events and fault management
c) historical performance monitoring
d) real-time performance monitoring
06. After a subordinate switch requests a domain ID form a principal switch, the requested domain ID becomes the runtime domain ID, and all interfaces on the affected VSAN are isolated. What is a solution to the issue?
a) Add the received ID to the allowed list.
b) Configure a static domain on the subordinate switch and reboot the switch.
c) Enable the FICON feature on the affected VSAN.
d) Configure IVR NAT on the affected VSAN.
07. After user account attributes are modified in Cisco NX-OS, when do changes to the user’s session attributes take effect?
a) immediately
b) at the scheduled time
c) when the user logs out of a session
d) when the user creates a new session
08. Two stable fabrics have overlapping domains. After a switch from the first domain is joined to a switch from the second domain, both switches become isolated. What caused the problem?
a) The auto reconfigure option is disabled on both switches.
b) The autoreconfigure option is enabled on both switches.
c) The rcf-reject option is enabled on the interfaces.
d) The rcf-reject option is disabled on the interfaces.
09. Which EtherType is used by the FCoE Initialization Protocol?
a) 0×8913
b) 0×8914
c) 0×xfc0e
d) 0×8906
10. The principal switch on a Fibre Channel network fails to assign requested domain to a subordinate switch. What are two reasons?
(Choose two.)
a) Cisco Fabric Services distribution is not enabled on the switch.
b) The fabric is locked.
c) The requested domain is outside the allowed list.
d) The persistent FC ID feature is not enabled.
e) An existing switch already has the requested domain assigned.

Note: If you find any error in these Implementing Cisco Storage Area Networking (DCSAN) sample questions, you can update us by write an email on feedback@nwexam.com.