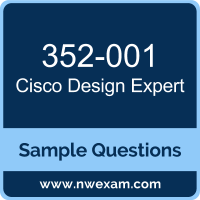 Before you write the Cisco Design Expert (352-001) certification exam, you may have certain doubts in your mind regarding the pattern of the test, the types of questions asked in it, the difficulty level of the questions and time required to complete the questions. These Cisco Certified Design Expert (CCDE) sample questions and demo exam help you in removing these doubts and prepare you to take the test.

The best approach to pass your Cisco 352-001 exam is to challenge and improve your knowledge. To test your learning and identify improvement areas with actual exam format, we suggest you practice with Premium Cisco 352-001 Certification Practice Exam. The practice test is one of the most important elements of your Cisco CCDE Design Written Exam exam study strategy to discover your strengths and weaknesses, to improve your time management skills and to get an idea of the score you can expect.

01. Which two steps can be taken by the sinkhole technique?
(Choose two.)
a) Reverse the direction of an attack
b) Redirect an attack away from its target
c) Monitor attack noise, scans, and other activity
d) Delay an attack from reaching its target
02. Which resource will be targeted by a TCP SYN flood attack?
a) Connection tables on the target host
b) Syn cookies on the target host
c) Send buffers on transit routers
d) Shared memory on the routers closest to the target
03. When is the site-to-site remote access model appropriate?
a) For multiple ISDN connections
b) For modem concentrated dial-up connections
c) For a group of users in the same vicinity sharing a connection
d) For use by mobile users
04. What are two considerations to using IP Multicast delivery?
(Choose two.)
a) No congestion avoidance
b) Not for bandwidth intensive applications
c) No guaranteed delivery mechanism
d) Source sends multiple data streams out each interface
05. You are the Cisco Network Designer in Company.com. You are designing an e-Commerce module, which routing statement is correct?
a) Routing is mostly static.
b) Hardcoded IP addresses are used to support failover.
c) Inbound servers use the CSM or ACE as the default gateway.
d) VLANs between the access layer switches are used for FHRP protocols.
06. Which item will be attacked by a DoS attack?
a) Availability
b) Correlation
c) Integrity
d) Confidentiality
07. IS-IS supports which two network or interface types?
(Choose two.)
a) Point-to-point
b) Non-Broadcast Multiple Access
c) Broadcast network
d) Broadcast Multiple Access
08. Which two benefits does VoFR provide?
(Choose two.)
a) Bandwidth efficiency
b) Cell-switching
c) Congestion notification
d) Heterogeneous network
09. During periods of congestion, which two impacts are of traffic shaping on traffic flows?
(Choose two.)
a) Increased delay
b) Fewer packets dropped
c) Less bandwidth consumption
d) More packets dropped
10. In secure IP multicast, which protocol handles group key management?
a) GDOI
b) MD5
c) IPsec
d) SHA-256

Note: If you find any error in these Cisco CCDE Design Written Exam sample questions, you can update us by write an email on feedback@nwexam.com.