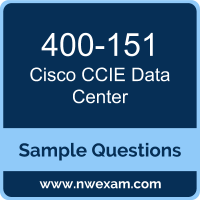 Before you write the Cisco CCIE Data Center (400-151) certification exam, you may have certain doubts in your mind regarding the pattern of the test, the types of questions asked in it, the difficulty level of the questions and time required to complete the questions. These Cisco Certified Internetwork Expert Data Center (CCIE DC) sample questions and demo exam help you in removing these doubts and prepare you to take the test.

The best approach to pass your Cisco 400-151 exam is to challenge and improve your knowledge. To test your learning and identify improvement areas with actual exam format, we suggest you practice with Premium Cisco 400-151 Certification Practice Exam. The practice test is one of the most important elements of your Cisco CCIE Data Center Written Exam (CCIE DC) exam study strategy to discover your strengths and weaknesses, to improve your time management skills and to get an idea of the score you can expect.

01. Which platforms support ITO?
a) Nexus700~Nexus900~Nexus600~andNexus5000
b) Nexus 7000 Nexus 9000, and Nexus 5000 only
c) Nexus 7000 Nexus 9000 only
d) Nexus 7000 with F3 line cards only
e) Nexus 7000, Nexus 9000, and Nexus 6000 only
02. You configured a Cisco usNIC connectivity policy, for a HPC environment. Which action also must be completed?
a) Download and compile the ring_c application.
b) Install the Intel MPI library environment.
c) Mount the MPI adapter in the operating system.
d) Install an MPI environment in the operating system.
03. The Cisco nexus 1000V Switch uses a multihypervisor licensing approach. Which three statements are true?
(Choose three.)
a) The Essentials edition comes with a 180-day trial for the Advanced edition.
b) An advanced edition license is required for each CPU socket on each VEM.
c) The VXLAN gateway is included in the Essential edition license.
d) The Cisco Nexus 1000 v switch supports Essential and Advanced license editions.
e) Only the Advance edition license is supported with multihypervisor.
f) You can migrate the license from a Cisco Nexus 1000V Switch for KVM to a Cisco Nexus 1000V Switch for VMware.
04. Which two options are advantages of deploying Ethernet-based FCoE switches such as the Cisco Nexus 7000 Series Switches beyond the access layer?
(Choose two)
a) lower overall throughput compared to native Fibre Channel switches
b) flexibility to support file (NAS) and block (iSCSI and FCoE) storage traffic
c) High-performance Ethernet-based FCoE switches cannot be used in a dedicated SAN core.
d) requirement for traffic isolation with dedicated links and storage VDCs is no longer required.
e) plans that include 40 and 100 Gigabit Ethernet speeds
05. How do you preprovision a Cisco UCS chassis?
a) Associate service profiles to each slot.
b) Associate a service profile template to the chassis.
c) Select pre provision from the general menu of the chassis.
d) Configure server pool policies for the chassis
06. Which three options can be used to add a device as a member to a zone?
(Choose 3)
a) Fibre Channel ID
b) IP address
c) LUN ID
d) fully qualified domain name
e) device alias
f) VLAN ID
07. According to Cisco, which two options are benefits of ITD compared to WCCP?
(Choose two.)
a) requires less TCAM entries
b) transparent for service node
c) does not require authentication or certificates
d) weighted load distribution
e) much less configuration
08. Which Ether type is used to identify FIP?
a) 0x8914
b) 0x8906
c) 0x8915
d) 0x8905
09. Considering the ITIL v3 model, what are Puppet and Chef primary used for?
a) problem management
b) configuration management
c) change management
d) release management
10. Which two statements about the Cisco Open SDN Controller are true?
(Choose 2)
a) It can be used in multivendor environments.
b) It is a commercial distribution based on the OpenFlow controller.
c) The controller is available as an appliance only.
d) Security is enforced by using the Open Services Gateway Initiative framework.
e) Your own, new network service functions can be added via Java APls.

Note: If you find any error in these Cisco CCIE Data Center Written Exam (CCIE DC) sample questions, you can update us by write an email on feedback@nwexam.com.