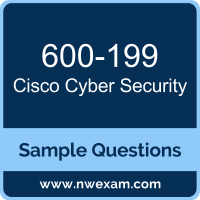 Before you write the Cisco Cyber Security (600-199) certification exam, you may have certain doubts in your mind regarding the pattern of the test, the types of questions asked in it, the difficulty level of the questions and time required to complete the questions. These Cisco Cybersecurity Specialist (SCYBER) sample questions and demo exam help you in removing these doubts and prepare you to take the test.

The best approach to pass your Cisco 600-199 exam is to challenge and improve your knowledge. To test your learning and identify improvement areas with actual exam format, we suggest you practice with Premium Cisco 600-199 Certification Practice Exam. The practice test is one of the most important elements of your Cisco Securing Cisco Networks with Threat Detection and Analysis (SCYBER) exam study strategy to discover your strengths and weaknesses, to improve your time management skills and to get an idea of the score you can expect.

01. Which publication from the ISO covers security incident response?
a) 1918
b) 2865
c) 27035
d) 25012
02. As a part of incident response, which action should be performed?
a) watch to see if the incident reoccurs
b) custody of information
c) maintain data security and custody for future forensics use
d) classify the problem
03. Which describes the best method for preserving the chain of evidence?
a) Shut down the machine that is infected, remove the hard drive, and contact the local authorities.
b) Back up the hard drive, use antivirus software to clean the infected machine, and contact the local authorities.
c) Identify the infected machine, disconnect from the network, and contact the local authorities.
d) Allow user(s) to perform any business-critical tasks while waiting for local authorities.
04. Which three symptoms are best used to detect a TCP SYN flood attack?
(Choose three.)
a) high memory utilization on target server
b) large number of sockets in SYN_RECV state on target server
c) network monitoring devices report large number of unACKed SYNs sent to target server
d) target server crashes repeatedly
e) user experience with target server is slow or unresponsive
05. Which action is recommended to prevent an incident from spreading?
a) Shut down the switch port.
b) Reboot the system.
c) Reboot the switch.
d) Reboot the router.
06. What is the purpose of the TCP SYN flag?
a) to sequence each byte of data in a TCP connection
b) to synchronize the initial sequence number contained in the Sequence Number header field with the other end of the connection
c) to acknowledge outstanding data relative to the byte count contained in the Sequence Number header field
d) to sequence each byte of data in a TCP connection relative to the byte count contained in the Sequence Number header field
07. Which protocol is typically considered critical for LAN operation?
a) BGP
b) ARP
c) SMTP
d) GRE
08. The IHL is a 4-bit field containing what measurement?
a) the number of 32-bit words in the IP header
b) the size of the IP header, in bytes
c) the size of the entire IP datagram, in bytes
d) the number of bytes in the IP header
e) the number of 32-bit words in the entire IP datagram
09. Which would be classified as a remote code execution attempt?
a) OLE stack overflow detected
b) null login attempt
c) BitTorrent activity detected
d) IE ActiveX DoS
10. What is the maximum size of an IP datagram?
a) There is no maximum size.
b) It is limited only by the memory on the host computers at either end of the connection and the intermediate routers.
c) 1024 bytes
d) 65535 bytes
e) 32768 bytes

Note: If you find any error in these Cisco Securing Cisco Networks with Threat Detection and Analysis (SCYBER) sample questions, you can update us by write an email on feedback@nwexam.com.